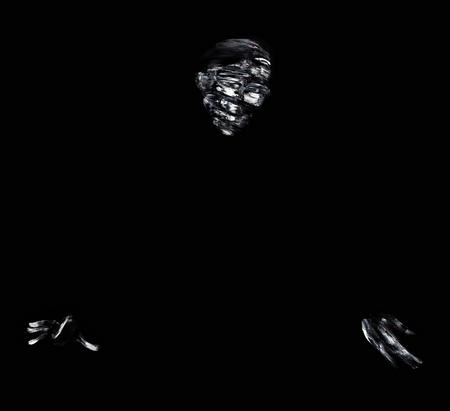 On the 500th anniversary of the death of Leonardo da Vinci, Lorenzo Puglisi pays his own personal homage to the Florentine genius with the monumental, original painting Il Grande Sacrificio (The Great Sacrifice), created specifically for the exhibition curated by Giovanni Gazzaneo in Bramante Sacristy in Santa Maria delle Grazie church from the 3rd to the 28th of April 2019.

Puglisi’s oil on poplar panel painting created in 2019, is mere steps away from the da Vinci masterpiece to which is dedicated – The Last Supper – and it’s displayed in the Sacristy in all its majesty, measuring six meters long and two meters high. It’s the artist’s largest work: from the abyssal black of the background, the head and the hands of Christ and of his apostles emerge in the purity of the white paint in a rhythmic and floating sequence.

Puglisi dedicated to Da Vinci’s masterpiece a series of artworks, which are part of a path that began seven years ago, as well as with other great artists of the past and their most famous works.

Giovanni Gazzaneo wrote: “Puglisi welcomes the history of art in his works not through the perfection of the form, but by offering us an open figure, free to play within the polarity of black and white in an endless dynamism. Black is not only a horizon nor a frame: it is the essence of the work. From darkness emerges a presence that is sustained by the darkness and from the darkness it is brought to life: flashes of light, slivers of dense and quivering paint, as if in movement. Black invokes the light and welcomes the birth of shapes. Within the creation of shapes, we are able to understand the meaning of Puglisi’s contemplation on the art of the past: the work is not dead, it is alive, it is fruitful and its beauty is meant to go through the centuries and continue to illuminate men and time. A beauty that is dazzling when it comes to an artwork like Leonardo’s The Last Supper. The apostles are depicted as real men, caught in a whirlwind of emotions and thoughts for the unexpected proclamation of a betrayal that is accompanied by the greatest miracle: Christ’s offering of love and life in the consecration of the bread and the wine. In Puglisi’s vision, faces and hands are made of light, almost depicting the perfect music score or perhaps a constellation of stars.”

In Puglisi’s pictorial research, space, light and form are established in a dramatic two-toned antithesis with a resulting suspension of time and space in a process of visual simplification that reduces the work’s composition to its most basic and deepest elements that are the focus of the viewer’s attention.

“In The Last Supper,” explains Puglisi, “Leonardo worked on what interested him the most: the inner motions of the human being, the relationship between gestures, emotions and thoughts, that we are able to see also in other works as the Gioconda and the Virgin of the Rocks. From here it starts my attempt to examine The Last Supper, which I believe is the sum of all the masterpieces of Western painting. In 2016 I presented the first Great Sacrifice in Paris (one and a half by five meters long), followed by other smaller works on paper, on canvas, on poplar and other medium, including also metal, with the ambition and hope that with every new depiction of the same subject, my work would acquire more an more intensity and energy”.

In all of Puglisi’s works centered on black and white emerges a strong chromatic symbolism, which examines not the absence of color, but the strength of it (achieved through continuous layering) and the representation of the pre-existing condition of things. A sort of primordial chaos where creation is potential and matter contains the existence before the generation of the cosmos and life. Without darkness there is no light, or, as Mark Gisbourne says, “it is from the most extreme emptiness or darkness that vision can emerge”: it is from a mysterious black, from the absolute darkness of the background that covers the entire panel that dazzling unexpected figures appear, made of dense white strokes with hints of red and blue. Gushes of light define volumes, faces, hands, and feet as fixtures captured in an expression or in a gesture; it’s the result of a long path towards essentiality of representation. Being inspired by old masters like Leonardo, Caravaggio, Rembrandt and Goya, Lorenzo Puglisi illuminates only what he wants to draw attention to, fragments that emerge from the darkness searching for light.

Alessandro Beltrami wrote in the catalog: “Puglisi works towards a complete removal of details by saturating the space with black, removing any possible context and not allowing any detail. He strips the discourse of any adjectives, parenthetical elements and complementary structures, reducing it to its root clause: subject and verb. On the other hand, he does a further reduction of any remaining elements, marked with bursts and veils of white, slightly streaked with red or yellow: the heads and what we recognize as anatomical parts are in reality a sum of pictorial gestures that does not ‘detail’ anything or almost a face or a limb.”
The exhibition, which also displays two artworks dedicated to the Passion of the Christ, Crocifissione (Crucifixion) 2018 and Nell’orto degli ulivi (On the Mount of olives) 2017, inspired by Velázquez, Rubens and Goya, is also a rare occasion to admire the beauty of the Bramante Sacristy, which is not usually open to the public. The Sacristy contains many treasures such as the paintings that decorate the 16th-century wardrobe doors, whose bright shades create a dialogue between antique and contemporary in one of the most intense and renowned places in Milan.
A catalogue published by Edizioni Manfredi curated by Giovanni Gazzaneo accompanies the exhibition.

Lorenzo Puglisi was born in 1971 in Biella. He lives and works in Bologna.

In 2005, he held his first exhibit at the Oropa Sanctuary in Biella. Since then, he has held numerous solo exhibitions and has participated in group-shows both in public and private settings throughout Italy and abroad, including: MUDEC in Milan, the Villa Reale of Monza, Villa Bardini in Florence, the Riso Museum in Palermo and CAC La Traverse in Paris.  He exhibited together with renowned artists like Omar Galliani, Nunzio and Mimmo Paladino. Between the critics that wrote about him, there are: Vera Agosti, Toti Carpentieri, Martina Cavallarin, Bruno Corà, Angelo Crespi, Valerio Dehò and Alberto Zanchetta. In recent years, his artistic research has been focused on large canvases that interpret masterpieces of the past filtered through his iconography, as displayed at the exhibition Paintings curated by Mark Gisbourne at Sobering gallery in Paris in 2016.  In June 2019, a monography of his work will be published by Hatje Cantz (Berlin) with text by Mark Gisbourne and Giovanni Gazzaneo in Italian, English and German. The monography will feature the most emblematic works of the artist’s career. A section will be dedicated to Il Grande Sacrificio, the exhibition in the Bramante’s Sacristy in Santa Maria delle Grazie in Milan. His future projects include a solo exhibition in the Crypt of the St Pancras Church in London during Frieze Art Fair in October 2019 and one with Omar Galliani at the Latvian National Museum of Art in Riga (Latvia) in May 2020.

Text and image downloads from www.irmabianchi.it